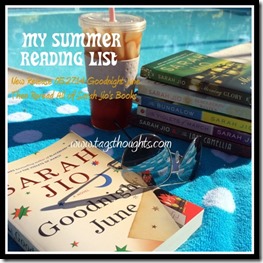 It is almost  summer and in most places it already feels like summer which has me thinking about my books of choice for afternoons on the beach.  Author Sarah Jio just released her sixth novel, Goodnight June.  And because I countdown to Jio’s book releases like a six year old counts down to Christmas I know better than to add this book to my “summer reading list”.  I will most certainly have Goodnight June finished before our beach day this weekend however I have decided that this summer I will reread all of my favorite Sarah Jio novels which includes every book she has written.

My best friend gifted me a signed copy of Sarah Jio’s first book, The Violets of March, when it was released by Plume (Penguin Group) in 2011.  Being that my best friend knew Sarah Jio through her then salon in Seattle she was aware of the plot and knew that Jio’s writing style would be one that I enjoyed.  My bff could not have been more right and I am extremely grateful for the introduction to these novels.  I have been a fan of Sarah Jio’s ever since reading her first book.  Jio’s writing style makes for such an easy read.  The setting of her books include my favorite era of 1930s/40s/50s and her dual storylines often touch the late 1990s through present day.  The plot of each book typically has a connection to her beloved Pacific Northwest and there is mystery, suspense, and romance all tied into these fictional novels.  They are engaging making it hard for me to put them down once I start reading and as mentioned I believe they will prove to make the perfect repeat read this summer.

If you happen to be looking to add to your summer reading list I recommend Sarah Jio’s books in this order:
– The Bungalow (released 12.27.2011) set in 1942, engaged Anne Calloway joins the Army to serve as a nurse; she meets a soldier whose mystery peaks her attention and begins consuming her time as they create their own story.
– Morning Glory (released 11.26.2013) set on Boat Street in the boathouse community of Seattle; after present day Ada Santorini leaves her broken life in New York she discovers a trunk & Boat Street secret in her residence (houseboat #7) belonging to Penny Wentworth from 1959.
– The Violets of March (released 04.26.2011) is set on Bainbridge Island in Seattle where Emily Nelson discovers a diary dated 1943 in her Aunt Bee’s home that involves many of the residents and a long time mystery that she feels obligated to solve.
– The Last Camellia (released 05.28.2013) another dual storyline set 50 years apart when Addison, a garden designer, uncovers the story of misguided Flora Lewis who traveled to England in 1940 to earn money to help save her family’s bakery.
– Blackberry Winter (released 09.25.2012) set in Seattle in 1933, when single mother Vera Ray’s three year old son is abducted during a night shift in which she had to leave him home alone; this tragedy and mystery was solved many years later in another dual plot.  (This book was by far the most difficult for me to read as my heart ached thinking of my own two boys with a lump in my throat and great sympathy for Vera as she longed to find her presumed dead son.) 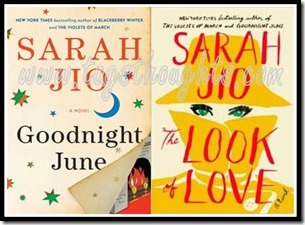 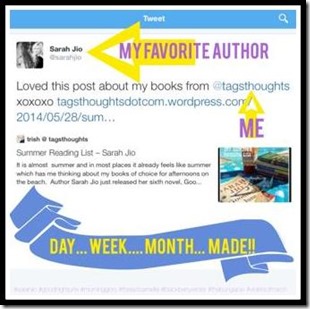 Note:  Sarah Jio tweeted me!  Writers everywhere can imagine how exciting that moment was for me.  It’s not everyday you receive a shout out from your favorite author!!  I’m still beaming.  See photo; if you follow me on Facebook, Instagram or Twitter you’ve likely seen it.

Click Here to view where I Link Up to Blog Party!

© 2014 All opinions are my own. trishsutton.com
I did not receive goods/funds/sponsorship to write this review.