Do you remember watching The Flintstones? That old cartoon was one of my favorites which is why I loved visiting Flintstone’s Bedrock City.

UPDATE: Bedrock City, Arizona will be closing for good. The last chance that visitors will have to join the Flintstone’s in Northern Arizona is the summer of 2019. 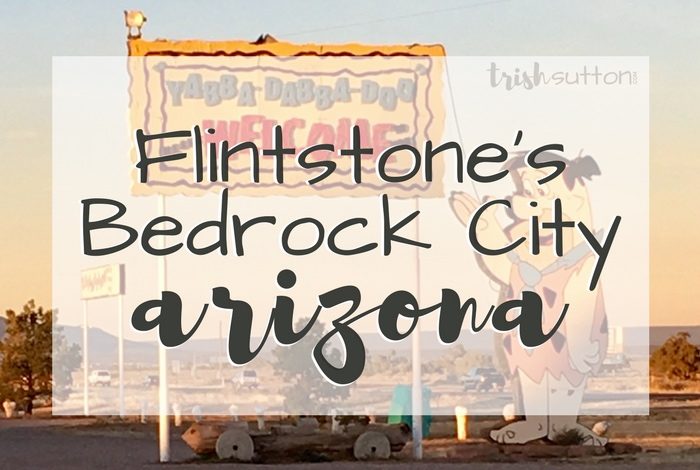 Growing up The Flintstones cartoon was on our television as often as Dallas and Dynasty. Fred’s “yabba dabba doo”, nights at Bedrock Bowl and foot mobile car were constants on our TV. It was the one television show that my brothers and my sisters could all agree on. We loved everything about that stone age town. 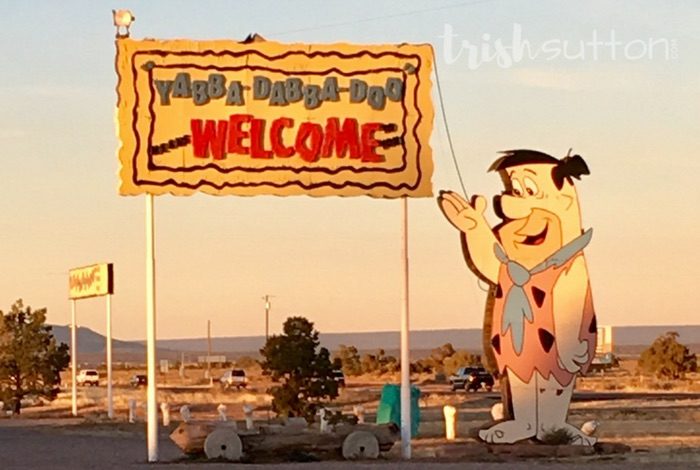 Have you ever heard of Flintstone’s Bedrock City in Northern Arizona?

It is the real deal. The small roadside amusement park will definitely bring back memories of The Flintstones cartoon. There are several buildings in the Arizona city of Bedrock including both Fred and Barney’s homes. Along with the houses there is a school, beauty salon, movie theatre, and even the jail. Best of all there is a bronto-crane slide that resembles the one that Fred operated for Slate Rock & Gravel Company. 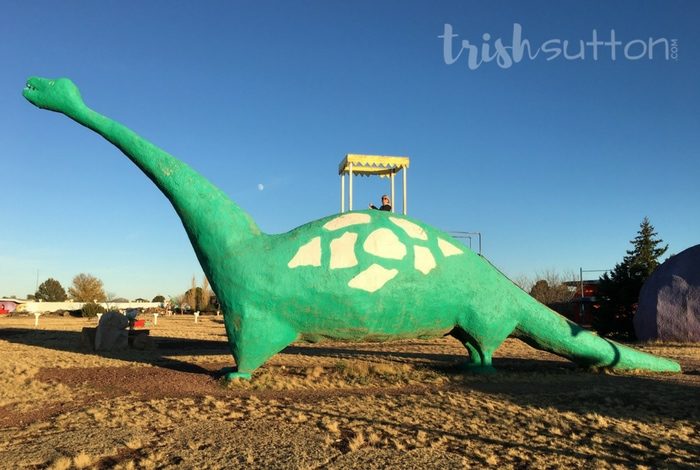 The small tourist attraction sits at the junction of Arizona State Route 64 and U.S. Route 180. Bedrock City is within an hour of both the Grand Canyon and Bearizona.  Services on site include a restaurant, gift shop, campgrounds and an RV park. There is no denying that the property has been neglected over the years. That said, even with the small entry fee it is worth the walk down memory lane. 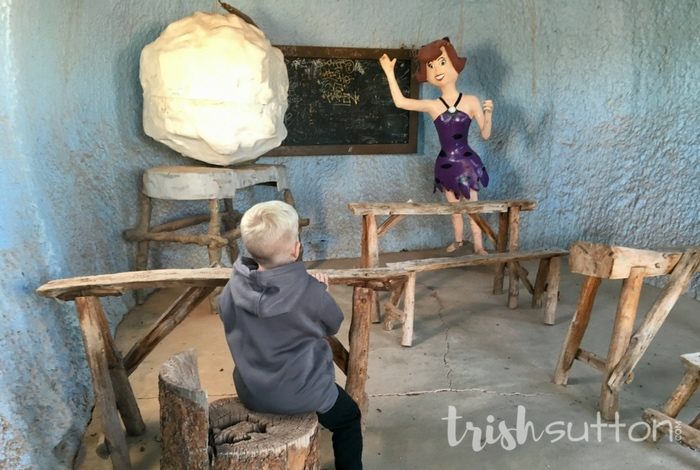 Our family visited Bedrock City on a breezy brisk afternoon. When we first arrived we happened to be the only people visiting the city made of faux rock. It definitely felt a bit eerie as the wind whistled through the buildings. However, we quickly got over our hesitant feelings and toured each structure in the dinosaur aged ghost town. 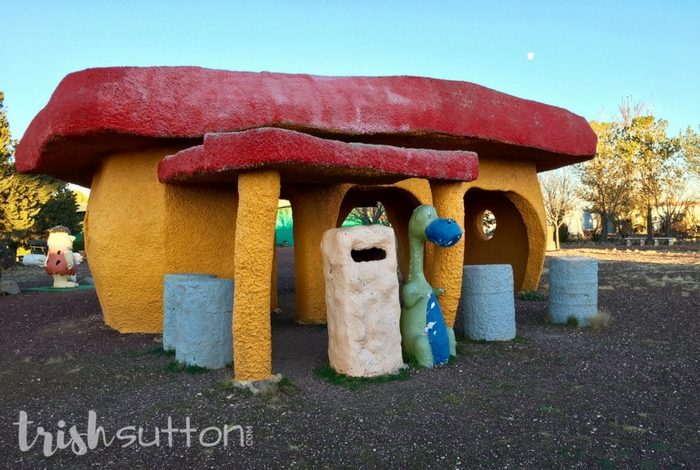 You might remember that our two boys are sixteen years apart. Neither of which are familiar with Fred, Wilma, Barney or Betty. Nor do they know Pebbles, Bamm-Bamm or Dino but that did not stop them from having fun in their town.

The boys explored every inch of Bedrock City. They served time behind bars together and they both made calls from the bone phone. Our oldest hung out at the fire department just in case someone pushed the bell. While our youngest climbed on top of the water buffalo and tried out every foot mobile. We took turns engineering the train then before we left we each slid down the bronto-crane. Yabba Dabba Doo! 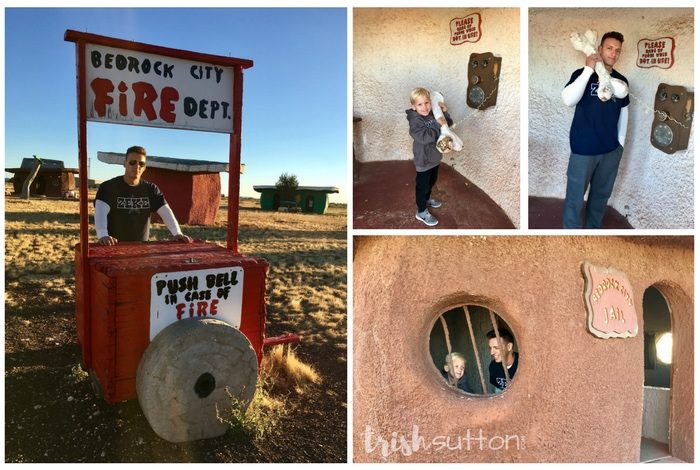 If you are a fan of the Flintstones and happen to be in Northern Arizona I recommend you stop by Bedrock City. Even in its aged state it makes for an amusing hour. With an open mind Flintstone’s Bedrock City can definitely be fun for all ages. 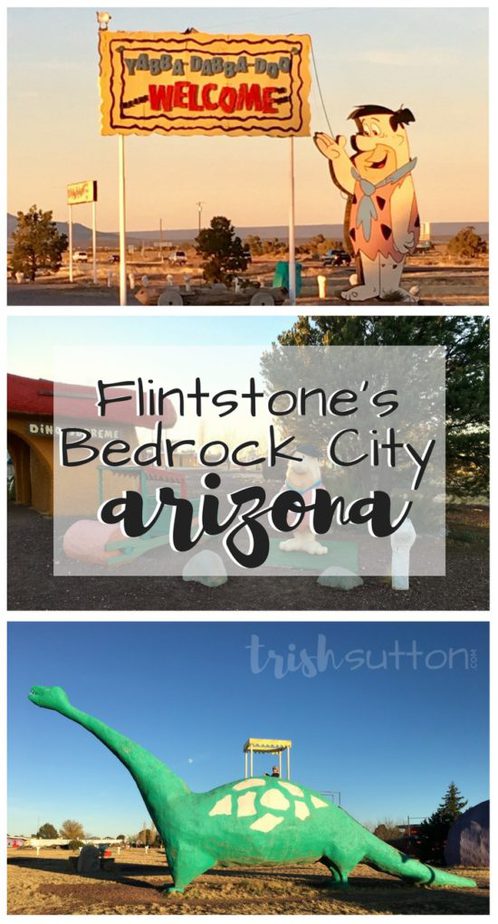